Showing posts from September, 2010
Show all

Better late than never? Has education entered the 21st Century? 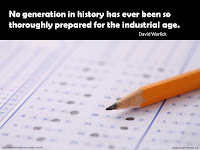 How long will we talk about preparing students for the 21st Century? The 21st century is a decade old. There has been much written about 21st century skills, 21st century learning and 21st century standards but we are coasting into the last few months of 2010. Has education entered the modern age? The unfortunate truth is, however, that for the most part, we have not. We all too often rely on standardized testing and outdated modes of teaching. Thankfully there are growing pockets of change and innovation, yet it seems that clinging to tradition is the norm. We are not just talking about using 'traditional' methods, like lecture or ‘drill and kill’, indeed, a good lecture has value - one just needs to watch some TED talks to see that. Still, this should not be the main method of teaching - we should be using methods of inquiry, problem based learning, critical reflection and collaboratio…
Post a Comment
Read more
More posts