A few weeks ago I tweeted my 6000th tweet. I marked it with a shout out to my current & past students at BU. This 'milestone', and I use the term lightly (I am not a prolific user of twitter, well that might be relative, I tweet more than many, but less than many others), along with being a participant in someone else's Ph.D. research,  prompted me to reflect back over my use of social media. It was really starting this career as a teacher educator and educational researcher that prompted me to start using social media to connect. While I had dabbled in some forms of Web 2.0 and social media as a school Principal, I started really using social media seriously in 2009 for many reasons. Primarily I thought I should know more about the media that many educators were using and beginning to use in the classroom. I did not want to be one of those people who criticize social media without a real knowledge of it. As I started using twitter - and adding in other media - slideshare, several Ning groups, LinkedIn ... (I now have too many social media accounts to keep track of) that I began to realize even more value. About this same time I also began blogging - this one is my first, started as part of a course in my Ph.D. program, and I added a few more after that. I found twitter to be the mainstay of my PLE, it was a way to share and discover resources, articles and posts of interest, but was even more so a tremendous way to connect and keep in touch with others. It is also, at times, a source of amusement! I follow many educators at all levels (I think it is vital to keep current with what is happening in schools given my role as a teacher educator & researcher) in addition to many other people from many walks of life. I have met so many of these people face-to-face, through online chats and other ways and each adds value to me as a person and a professional. I could go on to name some of the people I have met, but there are many & I have mentioned some in previous blog posts. This is the real value of twitter (& social media) - it is a technology, but it is much more - it is about people, and it does us well to remember that the people we meet - in person or online, that give life value.
connections PLN social media twitter

Popular posts from this blog 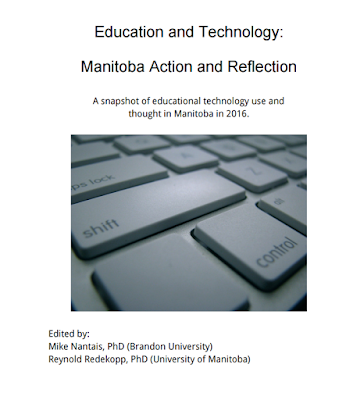 Late last year my colleague, Dr. Rennie Redekopp (University of Manitoba) and released a new free eBook we edited title Education and Technology: Manitoba Action and Reflection. This book consists of 15 chapters written by Manitoba Educators. The book is divided into 4 parts: Current Trends and Issues, Connecting and Sharing , Stories of Personal Transformation, and Where Do We Go From Here?

You can get the book here:
on the ManACE web site as a pdf, or in the iBook store. (It is also available on Kindle store - but you have to pay for it there!)

March 16, 2013
In a recent TED talk (below), Sugata Mitra contends that schools are not broken, they are obsolete: "I said schools as we know them now, they're obsolete.I'm not saying they're broken.It's quite fashionable to say that the education system's broken.It's not broken. It's wonderfully constructed.It's just that we don't need it anymore. It's outdated." He then goes on to describe his famous 'hole in the wall"experiments and his vision for schools in the cloud or Self Organized Learning Environments (SOLE), that is, schools in which children explore and learn with and from each other. While this is an intriguing idea - and might have some merit, kids should learn from and with one another, the thing that struck me in his description of the current school system - with which we are familiar, was his contention that they (schools) are not broken, they work in the way they were designed, but rather they are obsolete or out-dated. The…
Read more

October 30, 2015
So, I have signed up for Digital Writing Month. During the month of November various digital writing challenges will be given. It sounds like fun, and I would love to play with some other ways of writing, and improve in this area. The first task is to create an unofficial CV. I considered a way to be a little creative, and decided to make an infographic. I have my students make them to explore ways they can be used in the classroom, so I  thought I should give it a try as well. I used Piktochart - it was fun to do and here it is: