COSMOS - then and now

Neil De Grasse Tyson's remake/update of Cosmos is now over, and it was certainly well done. I had the privilege of hearing Dr. Tyson in person at the University of Manitoba a few months back. This was his first public lecture in Canada and the hall was packed. (see & hear the talk here). He is an entertaining speaker and obviously an intelligent, thoughtful person. The series was wonderfully done, making science interesting, understandable, and providing a great message. The Cosmos series brought back memories of the original with the great Carl Sagan. I remember watching it intently in my early years as a teacher. This renewal of Cosmos, along with some other events, have acted to rekindle an interest in science, and especially astrophysics. My first degree (long ago) was in Chemistry and Physics and much of my teaching career was teaching sciences. My attention has shifted, but an interest in science was always in the background, these events have really made me miss that deeper interest.

Of course, nothing can supplant the original, Carl Sagan was an amazing, intelligent, and eloquent person - a great ambassador for science. There are many videos on the net about/of Sagan: mashups with Sagan (think Symphony of Science), of Sagan speaking, and so on. I think I own and have read a good number of his books as well. I have a few favourite segments to share. In the original Cosmos, this opening segment is poetic and captures the viewer - at least this one - and the soundtrack was simply breathtaking.

My most favourite video/segment though is the Pale Blue Dot. This has become well known, especially since the renewal of Cosmos. Watch and be moved.

Light at the end of the Tunnel? 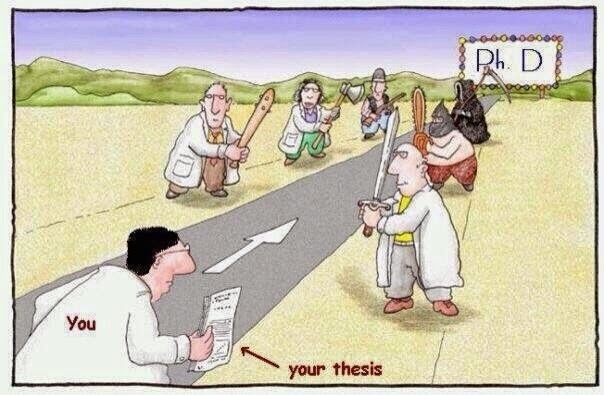 Well, the end is in sight ... hopefully. My dissertation, titled "Teaching With Social Media: A Multiple Case Study Approach", has made it through both the internal examining committee and now the external. I have a few revisions to make, then it is on to the oral defense at the end of the month!

A few weeks ago, I came across a tweet by GradSchoolElitist (@GradEletisim) with an attached image. I can't locate the original so I can't give proper credit, however, the cartoon is on the right. Anyway, the process sometimes does feel like running a gauntlet. The thing to keep in mind is that your advisor, committee, and the external are (usually - at least this is true in my case) on your side. I have learned much from these academics, they have prompted and pushed me to think and grow as a scholar, and I thank them for it. Of course, I will thank them even more if (when) I pass the defense!

For fun I have also included a video about defending the thesis, hope I don't have to do this!  ;-)